rentmoney in LeoFinance • 7 months ago (edited)

I know what some of you are thinking: "RentMoney, LeoDex has been around for awhile now". To that I say "Correct" but regardless of that there are many that have not utilized LeoDex yet. For those of you who are new to the Hive Blockchain or for those of you who might not had the time to dig into finding out about LeoDex let me give a brief breakdown. LeoDex is a DEX (exchange) on the Hive network. It is very similar to Hive-Engine and has the same secondary Hive tokens listed on it (tribe tokens) and other tokens such as Swap.Hive. Now that you are armed with that information you might be asking yourself: "Self, why use LeoDex when I already use Hive-Engine?". Well the main answer to that is fees. Hive-Engine charges a one percent fee (reasonable) for deposits and withdraws. On the other hand LeoDex charges a 0.25 percent fee. Now hold up, before you make the switch you will have to keep in mind, Liquidity.

The Hive Networks main token is HIVE. Swap.Hive represents HIVE held on Hive Native DEXs such as Hive-Engine or LeoDex. When considering Hive/Hive.Swap liquidity Hive-Engine seems to never run out. On the other hand LeoDex sometimes might not have enough to cover transfer needs. Outlined below is how to check the Hive Liquidity of LeoDex. 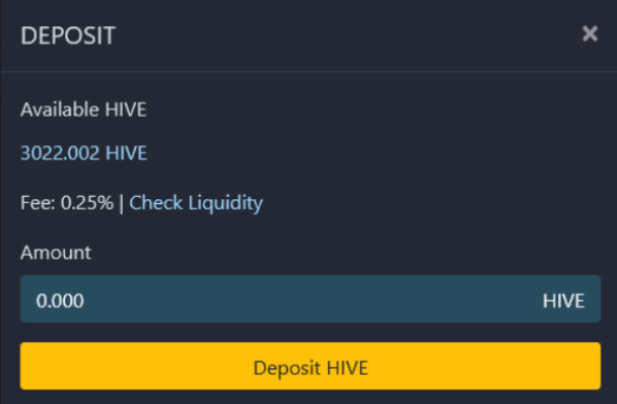 As displayed above in the screenshot, there is currently (01/11/2022) 1902 Hive in the LeoDex wallet. This means currently a user or multiple users will be able to trade up to 1902 Swap.Hive for Hive while using LeoDex. There would be no liquidity left to complete any trades exceeding the 1902 amount. If no liquidity is available one will have to wait until more becomes available before trading Swap.Hive for HIVE on LeoDex. Alternatively one would need to find another way to trade Swap.Hive for Hive (Hello Hive-Engine). LeoDex is brought to you by the LeoFinance team. LeoFinance is a frontend that allows user to access the Hive Blockchain and the team that operates that frontend are responsible for many different useful apps that are used daily. LeoDex is just one of those apps. Some of the others include HiveStats and LeoPedia.

Quite amazing for the blockchain

interesting project, I'll keep it in mind for when I have some Leo's on hand, for now an upvote for your post.

LeoDex is the perfect exchange for Hive Engine tokens. Let's see what the future holds for it, hopefully, some new features to trade using LPs.

Another quality post that draws me into the financial side of all this. Love it. Thank you @rentmoney

Nice tutorial and shout-out to a dapp I use daily !

Thank you for making things easy. I can now make use of my leo dex, just I do get confuse sometimes.

Useful to know thank you . My knowledge grows

I agree LeoDex is really good. But stopped using it on a regular basis for the liquidity reason. :/

As much as I like LeoDex, I don't use it as much to move HIVE in and out anymore. Hivepay charges 0.2% and I think Beeswap gives you some BXT depending on how many people are depositing and withdrawing for the same fee cost.

Those swaps are really important ! I didn't know LeoDex was a way to do it I usually do it directly from HE or BeeSwap :)

I love leodex but it has some problems like lack of liquidity to get hive.