imno in LeoFinance • 10 days ago

I did it! Last night I took 155 presale Chaos Legion packs out of Splinterland's coffers and put them in my wallet where they will soon be unleashed on the world.

Last week I wrote about trading some DEC for SPS for the 10% discount figuring SPS would shoot up this week and DEC would drop as we got closer to the final days. My thoughts were that buying before the SPS boost would mean I'd get a bit more of a discount since I'd spend less DEC on the SPS I needed.

What I didn't factor in was all of crypto pulling a Wile E. Coyote. I'm not mad though because at the same time the DEC I used to buy it dropped below .10 cents so the exchange rate isn't as dramatic as if I were buying with USD or something.

With a little bit of crypto recovery this weekend though, my expected scenario took place and SPS rocketed back to .51 cents.

Knowing that quite often whatever happens in crypto over the weekend tends to reverse when Asia wakes up on Monday morning and that SPS just made a sizable run-up from .36 to .51 in a few days, I decided to not push it any further and just pull the trigger.

So I took my enhanced discount and ran with it. 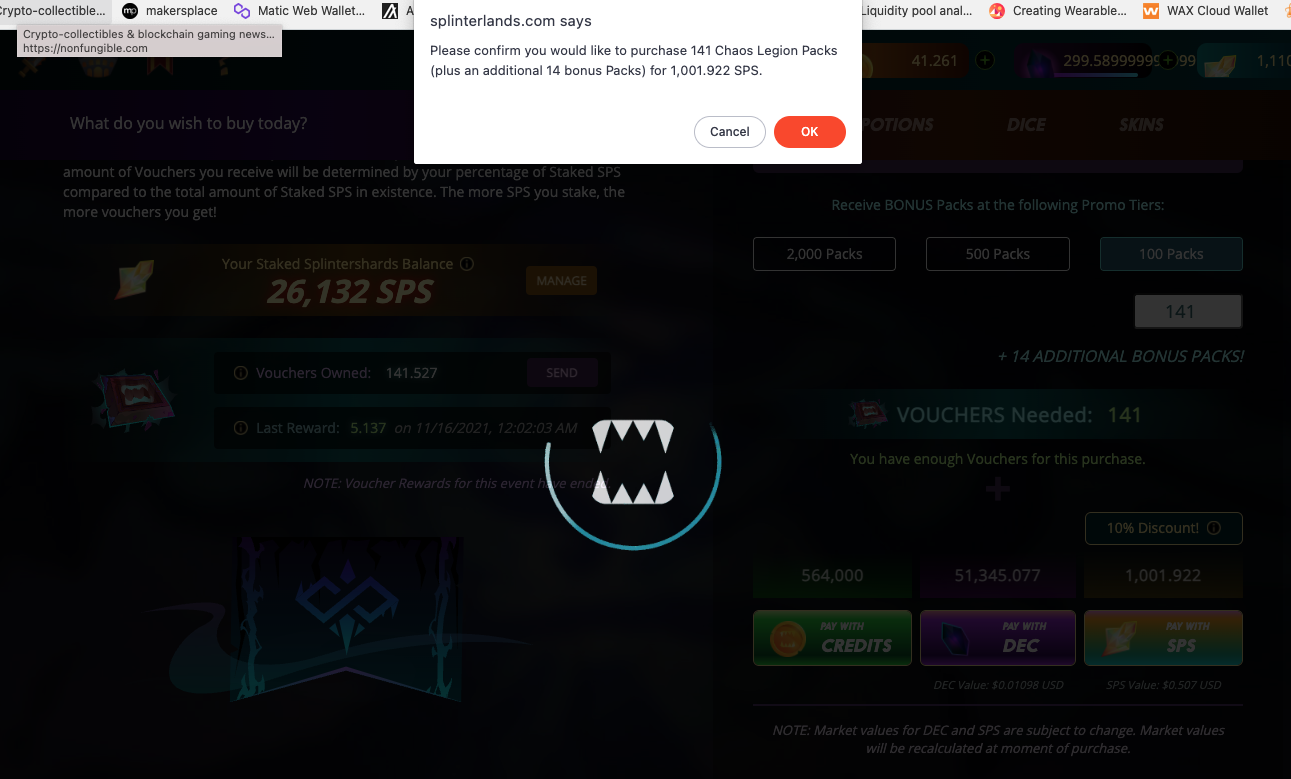 As I write this today and see SPS dropped back down to .42, I seem to have traded away my SPS right at the top of the market before Asia pounded all of crypto in the dirt.

I do love a good reliable pattern :)

So how'd I make out?

In fact, I'd say most of the time. There was a lot of game theory and opportunity cost built into this Chaos Legion pack drop and there were many different ways people played it. That means I spent more per card at $3.93 each than I estimated per pack above.

And it gets worse if you consider I could have sold those vouchers, held that cash in something that increased my SPS drop for a few months and then used it to buy not 155 packs but 643 packs once vouchers are no longer needed. That's almost 3000 cards I didn't get because I wanted to buy early. Whats the opportunity cost on that over the next few years?

But there's a third way to look at it that I feel has just as much validity. And this is both what's amazing about the crypto economy if you're on the right side of it, and absolutely infuriating if you're coming from the outside and trying to find your way in.

Actually, it was all free.

As I noted before, vouchers averaged around $18 on the open market. But I didn't buy a single voucher. They were all given to me free of charge by Splinterlands because I had SPS.

But I didn't buy the SPS either. I got that because I had other assets in the game.

Similarly, I didn't actually pay for the SPS that I used to buy the packs either.

Sure, I paid some DEC I got from my rentals for some SPS but the truth is, I couldn't stand the thought of that SPS sitting idle in an account for a week so I took that and matched it with some more DEC and threw it in the Beeswap liquidity pool which gave me double SPS airdrop points, earns me transaction fees, and a bonus 1% every single day. 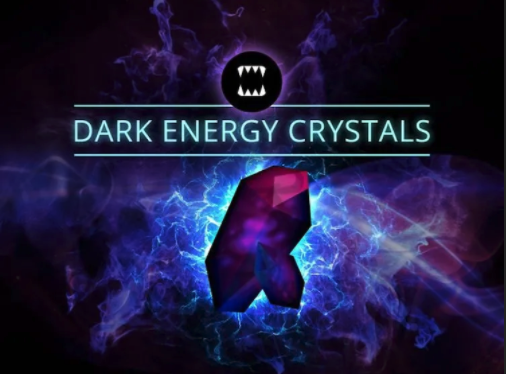 So where did the SPS I used come from? I'm sure you can probably guess. I just didn't stake 3.5 days of SPS airdrops because I didn't want to remove anything from the LP that was doing so well for me.

The truth is, I heavily invested in Splinterlands in July and August to the tune of $50,000 USD and since then, I haven't put in another dime.

Well so far I have: So you could look at it and say I didn't actually pay a dime for any of these packs and you'd have a solid argument there too.

Regardless to what I did or didn't spend on these though, there's one thing I do know.

I cannot wait to open these packs :)

You are killin’ it!

Do you think your 50k initial investment could have worked better somewhere else?

I'm sure there are plenty of Shib's out there I could have gone all in on and won bigger but I'm really in it for the income and compounding assets. I don't think it gets much better than Splinterlands for that this year.

It's such a hard choice to make. I have been getting 9 vouchers per day but didn't buy one pack.

Sold them all into sps, hive and cashed out some profit to live on.
I have no problem buying $4 packs but find it hard to justify $20 per pack when i can just wait with the crypto earned form selling vouchers and buy in big on day one of general sale.

I know that the fear is there of a quick sell out on day one but it wont be that quick for $60m of assets and if your ready to go i will be able to get a few thousand packs for free.

That is the thinking anyway.

I would say that the packs you bought cost $3k as it is crypto that could have bought you $3k worth of anything with it but you chose to buy packs. Hopefully it works out well and the airdrops will be nice as well.

Yeah, I keep thinking the best most was really to sell the vouchers and use it all to buy cards later. I wouldn't have gotten into the first three airdrops but the final 12 I'd probably be getting 3x more cards from. Also pretty close to 3000 more cards from pack overall for the same money. I know first hand that 3000 card in splinterlands can change a persons life.

When I made the decision to just buy the packs, the only question I asked myself was "Is 155 packs plus all the airdrops worth $3000?" and the answer was an easy yes. Didn't really occur to me until after I bought them just how much more I could have gotten out of that $3000 had I managed it better.

Now I'm thinking that's probably an opportunity I can't miss so if these first packs pay off, I'll probably just got ahead and buy 500-750 more packs and really blow up my deck.

Just trying to figure out how I want to pay for it. Options are outside cash, save up my DEC for a while, sell the round two vouchers for what every they are worth, or start selling cards from the first 155 packs.

My theory is they will spike in the beginning since so little access will be out there to the new cards. Then they will dip as access broadens and then they will start sloping upward again as the packs run out. That makes me think I should maybe sell the cards I get in the beginning and buy them back over the next few months cheaper and use the remaining funds to buy more packs.

Everything is a choice in Splinterlands

Congratulations @imno! You have completed the following achievement on the Hive blockchain and have been rewarded with new badge(s):

Can I get a glass of !WINE then?