Another Stablecoin Bites The Dust? 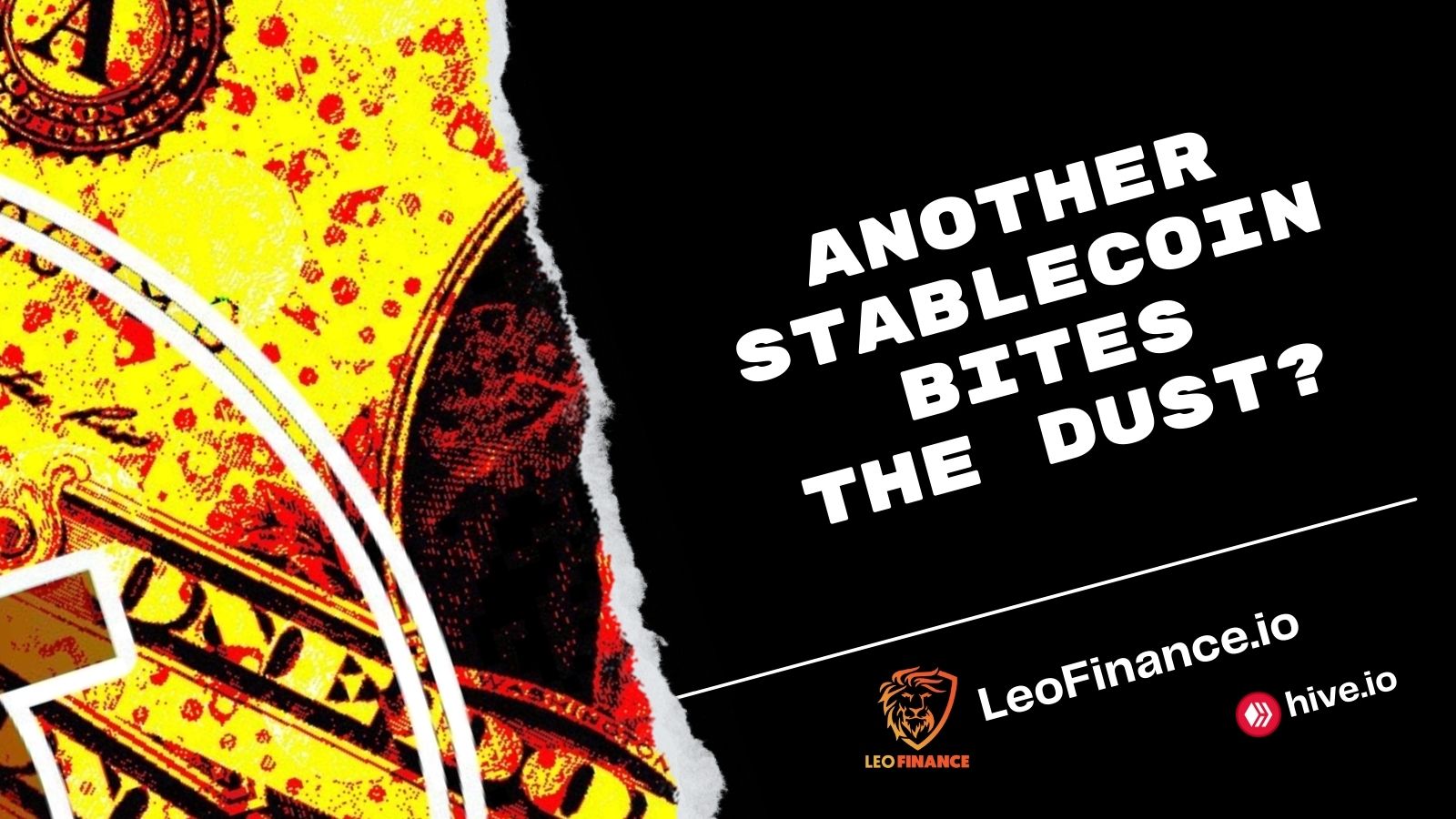 Another Stablecoin Bites The Dust?

As if the UST and LUNA mess wasn't bad enough and sent off shockwaves into the markets and really put a lot of people on edge. That panic took us into what was one of the hardest sell offs along with the combination of the FED and the stock market sell off really sent big shockwaves into crypto.

But that's not all another not as well know stable coin also crash and still has not regained it's peg. That stablecoin is called DEI.

IMPORTANT: Just because something is called a stablecoin does not mean it's actully back by anything if it should ever fall off the peg. These so called "stablecoins" simply try there best to hold a stable price. It could go higher and it could go lower.

DEI is a cross chain liquidity with a fractional reserve stablecoin. It's made up of 10% DEUS tokens and 90% of it is invested into other stablecoins. That's a pretty dangerous thing when you think about it. It most likely had a decent amount of UST in which that sell off crushed the price. If your stablecoin is based on other stablecoins well you are now simply trusting that these other stablecoins hold there peg. If they don't yours is screwed! Seems like a not so great way to launching your own stablecoin and honestly down right lazy.

A solid write up on how DAI get's its value can be found on this Medium article here Cross Chain Liqudity for fraction reserve stablecoin in short though it's getting its value from various liquidity pools and other chains.

At the time of writing this DEI trades for $0.63 If you take the peg loss of this one vs UST you see they actully don't match up at all which means this spells even more troubles for this stablecoin. With a market cap of just 46 million it very well could be being manipulated by some big players.

UST lost its peg on May 9th while DEI lost it on May 15th nearly a full week after UST and LUNA crashed. If we look at the total stablecoin market it now makes up 162 billion or what is roughly a little over 10% of the entire crypto market. It's a place I honestly don't like seeing us as it feels like real cryptos are being phased out and taken over by these so called stables. We also see running down the list of stables that there are others struggling to hold their pegs. some at $0.97 others at $1.05 even more at $0.72 and $0.82 what really cracks me up is for some reason HBD is not on coingeckos list of being a stable coin listing which I don't understand.

HBD is currently at $1 and I have to say through all the wild and weirdness over the last two weeks it's actully don't a fairly decent job compared to some of these others. Now I say that with a grain of salt because if anyone with some deep pockets wanted to screw with HBD they honestly could. Thus that's why a larger market cap and continues advancements need to be made in crypto as a whole. Personally I'd love to see us get off of the pegged stablecoin and instead go back to the value of the crypto tokens.

But could anybody really screw with HBD? I think it's actually not possible with the safety mechanisms in place

that is of course true 👍

It's an interesting perspective you offer, I can't help wonder - if we didn't have 20% APR on HBD, whether HBD would be so buoyant at the moment - and, whether HIVE would be down so much. Hive made some big jumps earlier today, from 0.48 to 0.53. Currently in 0.51, but it feels like it is ready for a leg up any day now - just needs some wider momentum in the crypto market.

I really don't get it. Why would you be backed by other stable coins? If you're going to spend the money to be backed by something, just buy the asset you're supposed to be pegged to. I feel like I'm missing something.

Exactly it kind of defeats the whole purpose of building your own stablecoin.

Nowadays it seems like it's synonymous for stablecoins to de-peg, it begs the questions as to what it was pegged to in the first place. It could be that LUNA has opened the doors, and feels like psychologically the peg safety we attach to stablecoin might not be there anymore. Money messes these things up.

It's made up of 10% DEUS tokens and 90% of it is invested into other stablecoins. That's a pretty dangerous thing when you think about it.

Pretty stupid to be fair.
Whatever about trusting your own ideas to maintain a stable peg but if your backed by other dodgy stable coins assets then things are not looking good for your future.

I agree you're pretty much putting your stablecoin to rely on what another is programmed to do. If too many of these so called stablecoins do that and the main one fails it's going to cause a massive domino effect.

You’ve discussed it very well. Nice to learn about Bites the dust as a stable coin, HBD is not listed on coingeckos but many says it can be potential stable coin.

Wrapped hbd on the polygon network is listed on coingecko though. Check out Polygon HBD https://www.coingecko.com/coins/polygon-hbd

Well the market going down will totally test some stables, will be interesting to see how they do.

From what I understand HBD has a mechanism that may withstand any shockwave. There is a 3.5 day price range for price and value and the system will eventually enforce HBD for Hive.
Hard to know if it will stand.
I will be more worry if HBD jumps over the dollar peg, Hbd stabilizer may have to buy as much to circumvent this incoming drama.
At least someone needs to test it and see if it works.

Submit
0.00 BHT
1 vote
Reply
[-]
poshtoken  last month
The rewards earned on this comment will go directly to the person sharing the post on Twitter as long as they are registered with @poshtoken. Sign up at https://hiveposh.com.
100%
-100%

I don’t see this coin on binance, is it not traded there?

Hey @bitcoinflood, here is a little bit of BEER from @pouchon for you. Enjoy it!

Learn how to earn FREE BEER each day by staking your BEER.

Ooft - Its a real wake up call to consider what you keep your money in. LUNA seemed like a great project, but it just shows you how anything can go wrong. It really has brought it home that it is important to spread your bets and not just lump all in with one investment method.

If you don't do your research into what is behind a particular stablecoin, you are just gambling!

What's bad for one crypto project is bad for the whole industry.

I still feel good about my HBD.

It seems that HBD has the best safety mechanisms around. Anything in a speculative market seems to be open to crashing.

The currencies that have a centralized system are beginning to fade, it is only a matter of time before we see the USDT and USDC collapse.

HBD isnt on the list as the marketcap is way too small and probably not taken seriously.

We all are studying and re-evaluating stablecoins I think, and while they serve a very useful purpose not all are the safe repositories of our savings we thought them to be, so we need to watch them daily or choose stables that don't need watching.

I am currently maintaining an investment in HBD-USDC to support HBD, Polcub and Hive. There is risk there, so it is limited.

I backlinked your article Here

I would speculate that some of these tokens got created and the creators did not have all the knowledge they needed.

They are dropping like flies now. Yes hbd can fail like the other coins. these are very unstable markets in every sense of the word how ridiculous is it to think hbd can't fail. i read an article about hopium today. Apparently this chain is full of drug addicts on it.