Since May 5th I started making a spreadsheet with my crypto savings.

Then I wrote down the balance I had at 11:59 pm each day, and the dollar quote of each currency.

So today, 3 months later, I decided to do a POB price analysis over the past 3 months. 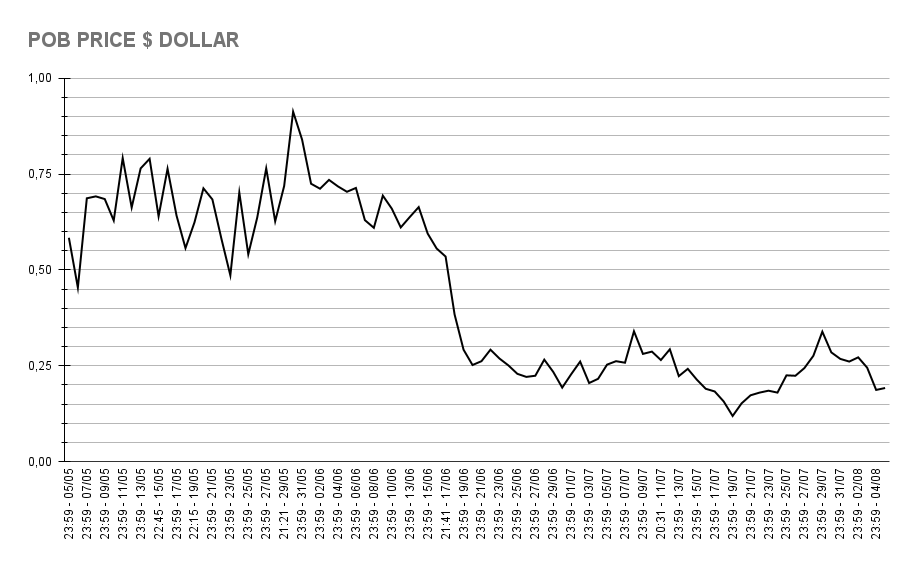 I have already accepted that this is the price margin that the POB will fluctuate while in inertia, that is, no other functionality for the network or announcements appear.

Some turbulent seas that we experienced months ago are no longer in evidence and the POB is maintaining a neutral routine from my point of view, without many misunderstandings and without much progress, I believe the price is reflected in that too.

I believe that people are in the accumulation phase, given the perspective of a scenario like 2013 and 2017 for 2021, thus, betting on the rise of bitcoin and, consequently, of alts at some point between the months of November and March.

After the accumulation period, I bet the POB can easily go back to a $0.50 parameter pulled by the Hive rally.

Take a look at the HIVE:POB quote, it's really interesting to know if you're getting more or less HIVE, but there's also the dollarized look, so we can know when to diversify our assets.

I don't see moments for panic, nor for euphoria, I see for a few more weeks the POB continuing to walk by these values, while new whales will continue to buy at a price close to 0.6 HIVE/POB and then they can also be whales around here.

Below is a table with each date and the dollar price for the date.

This crypto market is so damn volatile, the prices fluctuate like anything. It's best not to look at the prices so closely (it's great that you do but then don't get disappointed). Just keep working hard and wait for the right time to come.

I pray you should be wrong in saying that this is the range of PoB. It should be actually much above these levels. At these levels the activity has become lacklusture

The limited supply of pob does help it to maintain its price compared to other hive engine coins.

Cryptocurrencies have no boundaries; as you may know, Bitcoin's worth once exceeded $60000, and it is presently rising again. I believe POB has a bright future, and its value may reach $1 in the near future based on the crypto market.
Anyway, thanks for making the effort to keep us informed!

Good analysis. I agree with you. I think it will hold this level for the moment, but it should rally alongside other alts on a bull run

Wow this is an absolute tracking and record keeping. This is good to see. The development in the chart as well as the down casting shows how the POB market is staying relevant.

This is a 4month tracking record of your crypto analytic trading, may I even ask, how are you gathering the energy to forge further? cos this ain't a child's play at all.

Allocating resources also will be a huge challenge for me, if I get to your crypto level, because I really wonder how you can manage to allocate your resources and understanding the currency to key into and the the right currency to withdraw from. This must be some huge investment calculation and thinking through. I might ask, are you doing the allocation manually or are you using a computational approach or application? because I know how tricky and complex this can be.

Also You made mention about the sea turbulence of the previous periods pob maintained is regular routine, are you now saying we are likely seeing upward movement and growths, more like its value won't be dropping at least not any time soon?

I will be so pleased to know, now I see why crypto is the future and as a newbie following the right people like @vempromundo and a few more people in this community should guarantee me the ladder and steps I need to maximize my outputs and inputs because I am not even in a hurry to assume my accumulation stage. 😂 . I await your kind response.

Congratulations @vempromundo! You have completed the following achievement on the Hive blockchain and have been rewarded with new badge(s) :

Development progress is very important to lift up the price. When the developers announce actively the progress of the project, all users will amplify the progress then will attract more investors to buy POB. I hope there will be whitepaper of POB soon.

The second Hive pumps, all bets are off.